I know I’m not alone in the following admission: “I laugh at shit I’m not supposed to.”

why? well, I’m very immature.  I have no other logical explanation. I have stories.

1.  While attending law school, my cohorts and I would occasionally take short breaks in a gazebo that was a few short feet from the entrance.  One fine spring day, my friend Joe (not really Joe), told me an unforgettable tale.  One I will surely share with my grandkids, which goes as follows:

Joe: “Bridge, you will NOT believe what happened last night.”

Joe: “Well, my wife and I were going to watch a movie in bed last night.  So she pulls our blanket out of the dryer, and I guess it had a bit of static cling.”

Joe: “Well, I guess she farted right before I entered the room and she started violently shaking the blanket to get rid of the stench.”

Joe: “dude….The next thing I know she’s jumping out of the bed rolling around on the damn floor! I would never have believed this could happen if I didn’t see it with my own eyes!! The static from the blanket LIT HER FART ON FIRE!”

Joe: “Yes!! She was rolling around on the floor to extinguish the flames!”

Moral of the story… next time use a little snuggle fabric softener.  Avoid charred “ignition points” and awkward social situations.  Poor snuggles the bear, never had a chance.

2. One morning, approximately nine years ago, it was very early… around 4:30 am.  Suddenly, a maelstrom of obscenities spewed from my exes’ lips and traveled upstairs pricking my sleepy ears:

“Well gosh dang it, mother of god! You have got to be gosh dang kiddin’ me!! For the love of god! What a f*ckin’ mess!” – oh,  did I mention he has a southern twang which makes for far more humorous episodes of cussing?-

That morning when I awoke, I found an Oscar Mayer weenie wrapper taped to my bathroom vanity, along with a note that read: ‘This was clogging the toilet, and made the whole damn toilet overflow this morning. Keep a better eye on the kids, please!”

You see, the man was uh… “very regular”.  So I knew there were a few “finless brown trout” swimming around on our bathroom floor that morning.  A few logs a floatin’ down the ol’ river.  Feel what I’m laying down? hope I’m not being to subtle. ::ahem::

My email reply to him that morning, I recall it like it was yesterday: “I admire your fortitude for filtering through your morning constitution to acquire said weenie wrapper.  That really must have been something to remember.” He did not appreciate the sentiment.

As an aside, I also noticed that the wrapper was spotless, which suggested that he cleaned the label as well… also hilarious.  moral of the story: sometimes, you don’t want to be an “Oscar Mayer Weenie”… true story.

3.  As a child, I remember my father always had nice cars, various muscle cars and classic cars he’d fix up.  It was a hobby of sorts, and he always made sure my mom had a sweet ride.  This, however, came with a certain degree of expectations… unrealistic expectations for a woman with two small children.  i digress….

One summer day that started innocently enough, we loaded up the ol’ family wagon for a  trip to the local soda jerk shop. –soda jerk, who says that? funny-  I kid, we were just getting ice cream.  Only to this day,  I will never understand why the following events went down the way they had?

We had a white Monte Carlo with a maroon plush interior, gaudy buckle handle grips, complete with a magnificent golden scroll along the dash. It was like a couch on wheels, really… the finishing touch,  T-tops -so 80’s-.

With the T-tops down, on that fine summer day, with the wind in our hair we took to the open road with the anticipation of creamy cool ice cream tantalizing our tender senses.

I don’t remember the flavor of ice cream I ordered that day. But I vividly recall my brother’s choice…. chocolate.

Once there, after making our flavor choice, our father returned to the car with our cones.  No picnic table? really? Eat it IN HERE? well, shit… Even as a child I knew I’d rather counter with the likes of Satan at the precipice of Hades, than let even a drop fall from my lips. quickest ice cream cone of my life. straight up.

Then without warning, we were off… T- tops down, and that’s when gusty wind blasted toward us, and the chocolate shower began. Through my whipping hair, I could see my brother’s eyes widen to the likes of saucers with tiny black pins at their center.  The utter fear was mind numbing, and also hilarious… well, for me. at the time.

The never ending chocolate shower spattered across his rosy cheeks and onto the maroon plush beneath him. Luckily, my uproarious laughter was drowned out with the sounds of hearty wind gusts, as my brother’s face was completely enveloped in brown.   Suddenly,  his eyes instinctively clasped shut, and then the chocolate shower turned torrential and whole chunks began to spray.  Until there was nothing left but a very sad, very empty cone.

the horror. the inexplicable chocolate horror. Oh, and the belly laughs.

4.  We were venturing out one Sunday afternoon for a nice “family day”, but prior to our departure we had a new car seat which had to be “installed”.  My husband struggled with the epic torture device, and for some reason it was not anchoring properly.  A ten minute struggle ensued with its straps and the equipment’s enraging awkward girth.  Our perplexed two year old stared into his rage filled eyes, beads of sweat formed on my husband’s brow and his complexion flourished to the likes of a steamed radish…. After several minutes he exclaimed:

“I am so f*cking pissed right now!”

Of course I laughed, which I tried desperately to suppress only my body began to spasm into seizure like tremors…. and then out it came; the uproarious inappropriate laughter.

Today, I regret nothing, he was not amused. Meh… But to this day I still recall to him the aforementioned quote; complete with grinding teeth and affected seething rage, for even the slightest episode of rage:

He still doesn’t see the humor.  I think he’s coming around though, any day now.

5.  This cartoon on Nick Jr., Peppa Pig.  Is it me or do all these pigs look like they have a penis for a face?  Inappropriate? yes…. 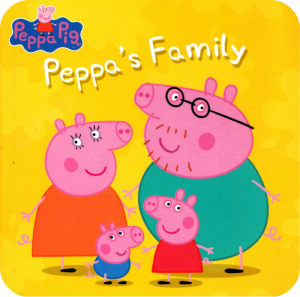 Actually to be more precise, they look more like chodes.  What’s a chode?  Let’s reference good ol’ urban dictionary, shall we?

What’s the moral of this story? my kids aren’t watching that shit.

6. I had a house in Portsmouth, there I had a long mahogany table and also hardwood floors.  From time to time I would bust out the lemon pledge and give it a shining. Only one day, I also pledged the floor. totally by accident. really…

Enter stage right, my ex… who went down like a 250 lb. sack of potatoes.  He stood baffled, as my bouquet of heckling laughter clung to the air around us, and he asked while staring at the floor:

6.  When we were young’uns, my parents brought my brother and I to a farm. There my brother was attacked by a rooster.  No injuries, just the hilarity of my mother chasing down an irate rooster; and me laughing hysterically while my father dragged me off to the bathroom for a good ol’ spanking.  Don’t care, it’s still funny.

On that note, I gots to go. I have very important, adult like things to do today. I leave you with this:

Anyone thinking, Paris? yeah… me neither, totally thinking Penis.

This entry was posted in Uncategorized. Bookmark the permalink.

4 Responses to sorry i laughed.